Versus Mode: Owners vs. Workers

The recent round of layoffs at Activision-Blizzard and elsewhere have made it all too clear that game industry bosses are prioritizing short-term profit over the health and livelihoods of workers. CEOs like Bobby Kotick are rewarded for treating workers as disposable, even when those same workers help to generate record revenue for the company. No matter how well the company is doing, shareholders and executives never seem to be satisfied, and are constantly searching for new ways to cut costs and boost profits, often at the expense of workers. Why does this keep happening? To better understand it, we need to look past the PR and into how the ownership of these companies is structured, where the profits go, and where decision-making power actually lies. 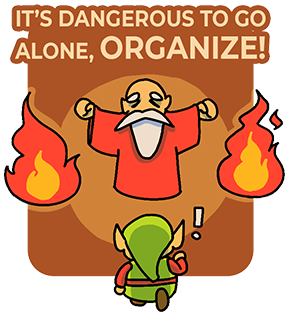 Any business is above all made up of its workers: they are the ones who are actually producing what the business sells, and whose labour is the source of its profits. But who do these profits go to? Not to them, but rather to those who happen to own the company: the shareholders. Large publicly-traded corporations can have millions of shareholders, and while some companies can be owned by a single business owner, even tiny startups typically have outside investors as shareholders beyond the original founders.

To shareholders, all that the business represents is a source of profit, either through the business itself increasing in value, or through money dividends. Shareholders might not have any real connection to the company or even care about what it does, let alone care about the welfare of its workers. They have money, and they buy shares because they want this money to grow into more money, without doing any work for it. (Creating this additional value does take work, but that work is done by workers like you and me, not by them.)

Jorgensen says the shuttering [of Visceral] was purely a business decision... "You've got to cut the bridge when you realize you can't really make a lot of money on something, so that's the decision we made."

Legislation varies, but CEOs have "fiduciary duty" to the shareholders, which effectively means that they are legally required to maximize profits. They can even be sued for putting ethical concerns above the duty of increasing value for shareholders! Not that they need the extra motivation: upper management's loyalty to shareholders is usually ensured by granting them shares as compensation, as well as large bonuses tied to company profits.

Shareholders always have the option to sell their shares and buy into a different company, so if a business doesn't perform well enough in terms of profits in the short-term, the value of the shares decreases. The consequence is that businesses are not merely driven to make a profit, but to make the highest possible profit in the short-term, over anything else. And one of the main ways of increasing profits is to minimize expenses such as salaries to workers, which is why the mass layoffs keep recurring. Studios can hire a bunch of game developers as work ramps up on a large project, make them crunch unreasonable hours to get it released as fast as possible, then lay off most of them after sales start coming in to ensure that salary expenses are minimized and profits kept as high as possible. This isn't "bad management." It's the system working as designed. Executives make decisions for the benefit of the owners at the expense of the rest of us.

This is why we also typically see share value increase after every round of layoffs, as happened recently with Activision Blizzard: when mass layoffs get announced, management is sending a message to shareholders that they are willing to do what it takes to ensure ever-increasing profits no matter what, and this makes company shares more attractive on the market. Shareholders are thrilled! They get richer, and the rest of us get poorer. That's why the decision is made in the first place, not out of any real necessity, despite how they try to spin it to the workers.

It's not a question of "good bosses" vs "bad bosses." Workers and owners have fundamentally different interests. Most of the things that benefit workers — higher wages, shorter working hours, better benefits, job security, a safer work environment — also cut into company profits. In short, every dollar that goes to your wage is a dollar that doesn't go to the owners. In order to maximize profit, many bosses will try and squeeze as much labour as possible out of their workforce while keeping wages as low as possible. Long periods of unpaid overtime are common in the game industry in part because bosses have (so far) been able to get away with it, despite laws that make unpaid overtime illegal in many countries.

Often bosses justify this treatment by arguing that anyone who complains just isn't "passionate" enough. But selective appeals to passion are just another strategy to wring more out of workers who just want to be able to make games sustainably and hone their craft without burning out. Unlike workers, owners and bosses don't actually care about making the best game possible. Their first priority is to make money — and right now they're the ones calling the shots, without any accountability to the people actually making the game.

But it doesn't have to be this way! Workers have the potential power to change this dynamic and to force the businesses they work for to take their best interests into consideration too. This is because in every industry, every business, it's always their labour that is the source of all the owners' profits. When it comes down to it, it's owners who need the workers, not the other way around. Isolated from each other, workers are completely vulnerable to the whims of management, as they are devalued and reduced to having to beg for better conditions — but united and organized, workers can build the leverage to actually negotiate with management from a position of power. Unionizing is the only way to tip the balance in the other direction and create a better game industry for all workers!

Beyond this, we can also imagine an entirely different way of structuring the industry — one that would not fundamentally rely on the exploitation of workers for the benefit of shareholders. This is what workers' cooperatives aim to do: they are businesses with no external shareholders that are entirely and collectively owned by all the workers who work there themselves, allowing them to earn the full benefit of their labour. (Check the section on worker co-ops later in the zine!)