A History of Unrest

It's easy to forget that labour issues have been central to the business of making games from the very beginning. Easter eggs, now a widely-known phenomenon in games, initially emerged from issues around crediting and disputes between workers and management at game companies.

Warren Robinett was developing Adventure at Atari in the late 70s. At that time, it was typical for studios to suppress any attribution for the games they released to prevent competitors from poaching their talent (and to make it harder for workers to establish a provable portfolio of work to get hired elsewhere or develop a reputation of auteurship). In protest, Robinett introduced an additional room to the game, carefully hiding it behind a convoluted series of tasks so that it wouldn't be discovered until after release, that would display the words "Created by Warren Robinett." 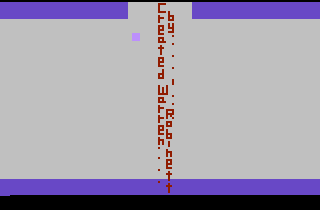 When the Easter egg was discovered by Atari, Robinett had already left the company, but that didn't stop them from devoting development resources to uncovering the offending code. However, Brad Stewart, the Atari employee who tracked down the code in question, said that if he were to fix it, he'd just change the message in the game to say "Fixed by Brad Stewart" instead. Eventually, Atari management decided that Easter eggs should be permitted, and even encouraged developers to add them as a way to increase playtime and give players more value — but they generally limited them to developers' initials rather than full names.

Developers have never really stopped hiding messages in games as protest or in hidden resistance. In the Italian translation of Final Fantasy VIII, when the "Scan" spell is cast on a placeholder debug enemy, a message is shown written by the translator themself: "This translation is killing me. It's almost 2 in the morning. I'm tired!!!! I'm tired!!!!"

< What Can Unions Do to Help?Versus Mode: Owners vs. Workers >
From the Desk of the EditorsUnionFAQs: What's a Game Worker?What Can Unions Do to Help?UnionFAQs: A History of UnrestVersus Mode: Owners vs. WorkersUnionFAQs: Is Profit-Sharing What We Want?When Gamer Rage Gets Harnessed to Discipline WorkersUnionFAQs: What Are Strikes?UnionFAQs: Below the (Grass)rootBoss Fight Tips & TricksUnionFAQs: Get Indie?Workers' Cooperatives: A New Way of Creating Commercial GamesUnionFAQs: Craft Unions, Industrial Unions… What’s the Difference?Strategy Guide: How to Start Organizing your WorkplaceUnionFAQs: Not in the Industry?In Closing