Unions aren't just for huge workplaces. While unions might sound like a logical fit for large companies (say, ones where a multibillionaire boss you've never met can fire you while talking about how you haven't realized your "full potential"), even smaller workplaces can benefit enormously from being organized. In fact, in our experiences small studios can sometimes be even more abusive, and more prone (wittingly or unwittingly) to violating your rights and boundaries as a worker. Small studio owners will often claim "we're all in this together," but they're the ones controlling your salary and the ones who stand to benefit from the company's successes — not to mention the ones who can fire you when things go wrong (or if they decide they don't like you). Again, organizing with your coworkers can help give you leverage against these kinds of abuses.

Another way of looking at it is that organizing can simply help better reflect who's actually doing the work at your job. Even if small business owners may wear many hats or work alongside you, they usually have disproportionate decision-making power or the ability to veto whatever they choose, because they're the boss. If game development really is a team effort, why shouldn't we be guaranteed a hand in steering the ship?

Unionizing now also means you'll be prepared in case of a change of management, whatever the reason for it. It's the owners who decide when to sell the studio, and they're the ones who get to cash in on all the work that was put into it when it gets bought out. When that happens, usually all you get as a worker is a change of bosses. Notoriously, Notch sold Mojang to Microsoft for $2.5 billion and became enormously wealthy for it, while his employees received nothing. (Microsoft would later offer a comparatively tiny $300,000 — that's a whole $0.0003 billion, folks — incentive to workers, but only if they agreed to remain Microsoft employees for another six months.)

News of the sale changed things at Mojang. Some felt betrayed by Markus's decision. Morale plummeted. "People felt like the world was coming to an end." (Source)

There are many more untold stories in the indie scene of folks who join a small startup and accept to be paid less than they're worth because they really believe in the project — only to receive nothing after the game makes it big and the owners sell out for millions. 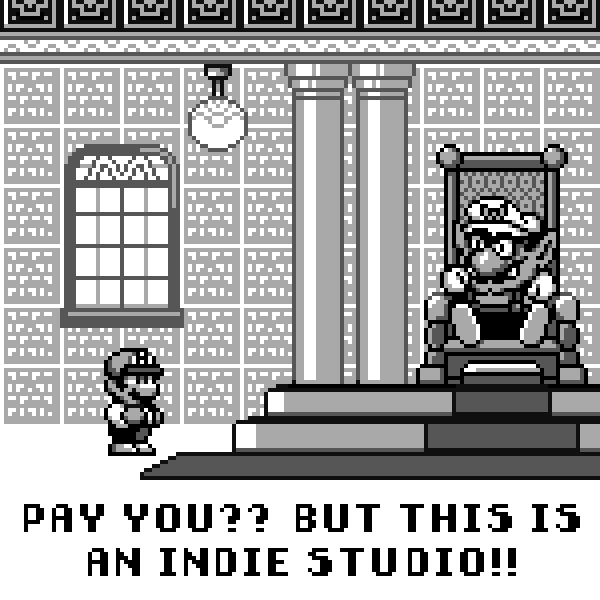 If your small studio boss claims to be sympathetic to unions: great! As a worker, you're well-positioned to help them put their money where their mouth is. But be warned that their sympathy might evaporate if you make it clear that you want to unionize your own "scrappy" little indie studio rather than some other company a hundred times bigger than you. Ultimately, owners stand to lose power and money if their studio unionizes, which — go figure — makes it a hard sell for a lot of them when it comes down to brass tacks. It's in these moments that it becomes clear just how shallow the "we're all friends here" mantra really is. By bargaining collectively, you are forcing your employer to reckon with the realities of working together: the boundaries you want to ensure are in place, the rights you want to assert, the conditions you want to improve. These are all topics that tend to be difficult to broach on your own when there's an unacknowledged power dynamic.

"By fabricating the illusion of employer as friend, the employed is denied the opportunity to protest, argue, fight, be adversarial and demand more of their working conditions."

If your boss really really means it when they say they're sympathetic and want everyone to be equal, why not push for collective ownership? Transitioning to a cooperative model is a great way to ensure everyone at a company benefits from their successes and hard work. And if you're thinking of starting a new studio yourself, forming a worker cooperative is a great way to bake in those values right from the start.

< Boss Fight Tips & TricksWorkers' Cooperatives: A New Way of Creating Commercial Games >
From the Desk of the EditorsUnionFAQs: What's a Game Worker?What Can Unions Do to Help?UnionFAQs: A History of UnrestVersus Mode: Owners vs. WorkersUnionFAQs: Is Profit-Sharing What We Want?When Gamer Rage Gets Harnessed to Discipline WorkersUnionFAQs: What Are Strikes?UnionFAQs: Below the (Grass)rootBoss Fight Tips & TricksUnionFAQs: Get Indie?Workers' Cooperatives: A New Way of Creating Commercial GamesUnionFAQs: Craft Unions, Industrial Unions… What’s the Difference?Strategy Guide: How to Start Organizing your WorkplaceUnionFAQs: Not in the Industry?In Closing